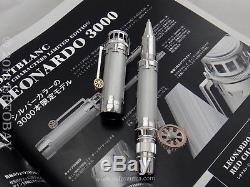 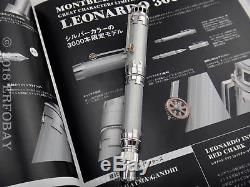 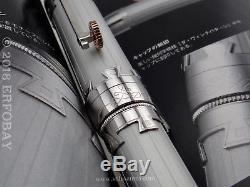 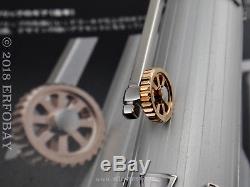 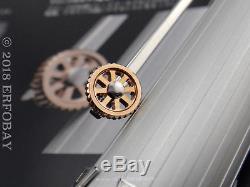 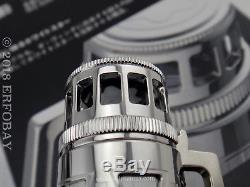 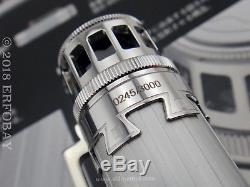 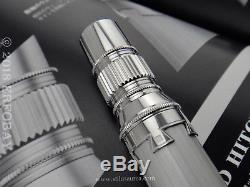 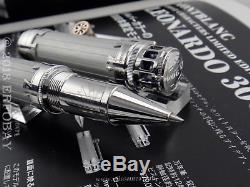 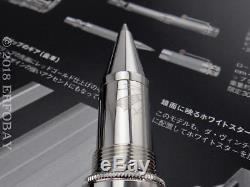 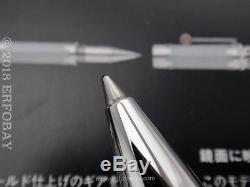 MONTBLANC Great Characters Leonardo da Vinci Limited Edition 3000 Rollerball Pen. Leonardo da Vinci was an Italian Renaissance polymath: painter, scientist, engineer, theorist and architect whose insatiable curiosity and thirst for knowledge led to some of the most influential artworks and inventions in history. Leonardo's fascination with human flight influences the overall design of this Limited Edition, each detail taken from the numerous studies he produced for each of his elaborate flying devices from parachutes, to hand gliders and helicopters. The cap and barrel of the writing instrument are crafted from anodized aluminium, a reference to the material now used to build todays flying machines or aeroplanes. The polished platinum plated fittings are reproductions of da Vincis studies for wedge connections, the shape on the cone refers to the double movement transmission conceptualized by da Vinci over 500 years ago and the red gold plated gear at the end of the clip is reminiscent of the many cogwheels the Italian master used in his designs. The forefront of this rollerball pen is etched with his own sketch of a mechanical wing. A subtle reference to his practice of mirror writing gives the Montblanc emblem in precious resin which is unexpectedly concealed within the cap and its reflection can be seen in a mirror placed inside the cap top. Mint condition, never used and never inked. No box and no papers. FYI We are offering the matching number Leonardo da Vinci fountain pen #0245/3000. The item "MONTBLANC 2013 Great Characters Leonardo da Vinci LE3000 Rollerball Pen 245/3000" is in sale since Friday, March 30, 2018. This item is in the category "Collectibles\Pens & Writing Instruments\Pens\Fountain Pens\Montblanc". The seller is "erfobay" and is located in Paris. This item can be shipped worldwide.