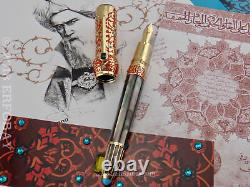 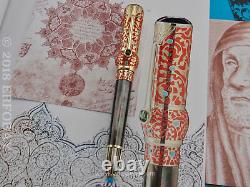 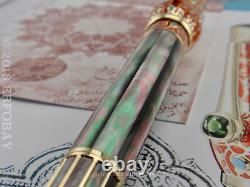 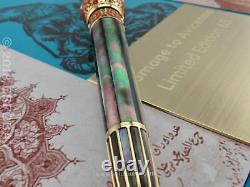 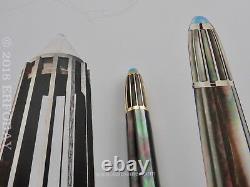 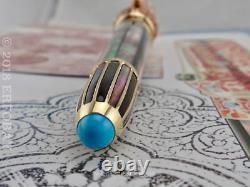 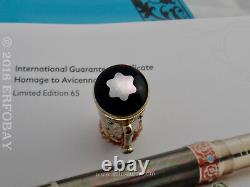 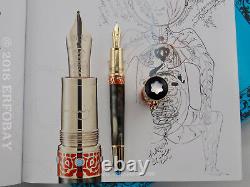 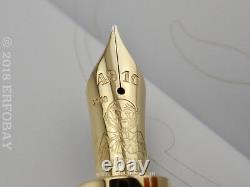 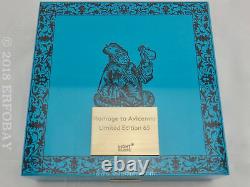 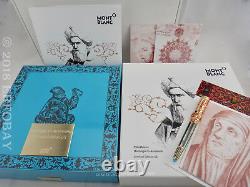 MONTBLANC Artisan 2018 Homage to Avicenna (Ibn Sn) Limited Edition 65 Fountain Pen R ef. M28717 Year 2018 Limited Edition: ##/65 An homage to the Persian polymath: Avicenna. A philosopher, A physician, A writer, regarded as one of the most significant of the Islamic Golden Age. Width of life is more important than length of life Medicine is a science by which we learn about the conditions of the human body in health and in the absence of health, in order to mantain health or restore it I devoted myself to studying texts and the gates of knowledge began opening for me Avicenna (original name Ibn Sînâ), born near Bukhara in 980, was one of the most prominent philosophers, scientists, physicians, matematicians, and astronomers of the Islamic golden Age.

He is described as the forefather of modern medicine. Born from a Persian family, he soon emerged for his peculiar and early brillance: by the age of ten he had memorized the entire Quran.

Although his Persian origins, he wrote the majority of his two hundred and fifty works in Arabic, which was the scientific and philosophical language at the time. Among his masterpieces we find The Book of Healing, an encyclopaedia about philosophy and science, and The Canon of Medicine, an impressive medical essay. He became interested and started studying medicine at the age of 16 and also spontaneously practiced his knowledge and treatments by helping sick people. When sultan of Bukhara felt ill he was called to his bedside and, as reward for curing him, he was given the permission to consult the royal Sâmânîd library, a treasure of science and philosophy.

To honour this great polymath, Montblanc has created the Montblanc Hommage to Avicenna Limited Edition 65. The pattern on the Au 750 solid gold cap set with turquoise stones is inspired by the fine ornamentation of early medieval manuscripts of The Canon of Medicine. The colour of the luminous orange lacquer corresponds to the garment worn by Avicenna in one of his most famous portraits. The clip is set with a green facetted tourmaline, while the cap top is crowned with the Montblanc emblem in mother of pearl.

The Au gold handcrafted nib of this Limited Edition bears an engraving inspired by one of the most precise depictions of the human anatomy, published in The Canon of Medicine. Avicennas observations on the medicinal effects of mother-of-pearl were the source of inspiration for the extraordinary material of the Limited Editions barrel: shimmering, black mother-of-pearl from the Tahiti shell. The shape of the cone of the Montblanc Homage to Avicenna Limited Edition is inspired by the striking tower of the Avicenna Mausoleum. The end of the cone is crowned with a Persian turquoise, a stone discovered thousands of years ago in Persia, and which is considered to have spiritual powers. The pen comes in pristine condition (never used and never inked) together with all original boxes and papers. Design features: The graphic pattern on the cap is inspired by the drawing in The Canon of Medicine. Same as per the mother of pearl barrel. The Canon of Medicine introduced the medical effect of mother of pearl indeed.

The shape of barrel and cone is inspired by Avicennas Mausoleum striking tower (a complex located at Avicenna Square, Hamadan, Iran). The nib is enriched with a fine engraving inspired by Caduceus, wich is a symbol of medicine, paying tribute to the legacy of Avicenna in this field. Forepart engraved with the original spelling of his name Ibn Sn The red color on the solid yellow gold cap is inspired by a portrait of Avicenna Limited to 65 pieces inspired by Avicenna birthplace near Bukhara, which current area code is 65.

Product features: 18K -750 yellow gold chassis and fittings Mother of pearl barrel and turning knob Persian turquoise cabochon is set in the end of cone. Turquoise -> Cabochon cut, 1.01 carat / Round cut, 0.38 carat Green tourmaline -> Antique cut, 0.45 carat Mother of pearl MB emblem Specific turquoise display box with outer packaging and matching papers. We use only high quality materials such as double wall cardboard boxes, extra large buble wrap, polypropylene packaging tape, pvc pipe with high resistance. The attached photographs are to be considered part of the description. We are at your disposal for any further information. We usually reply messages within the same day, but please allow do bear in mind that our time zone differences might cause a slight delay. The item "MONTBLANC 2018 Homage to Ibn Sn (Avicenna) Limited Edition 65 Fountain Pen M" is in sale since Friday, March 22, 2019. This item is in the category "Collectibles\Pens & Writing Instruments\Pens\Fountain Pens\Montblanc". The seller is "erfobay" and is located in Paris.