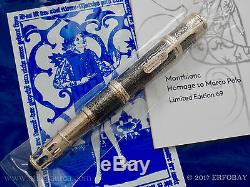 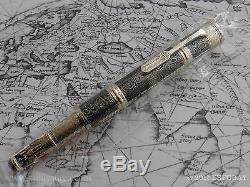 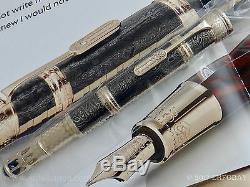 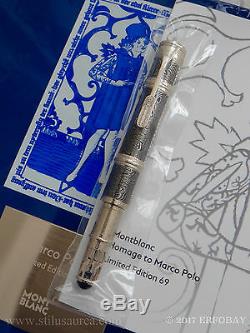 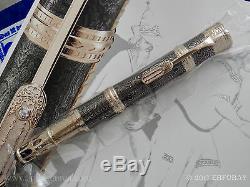 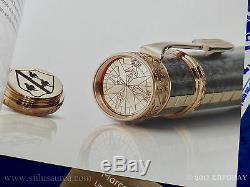 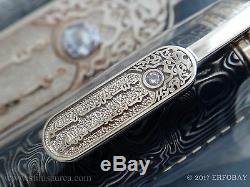 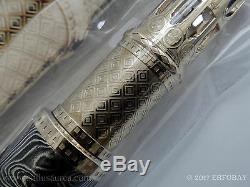 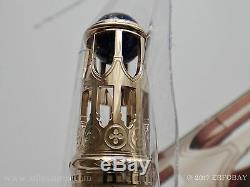 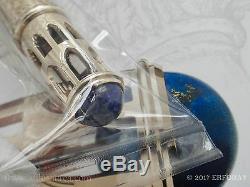 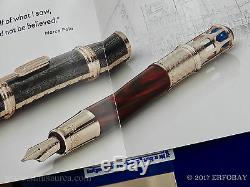 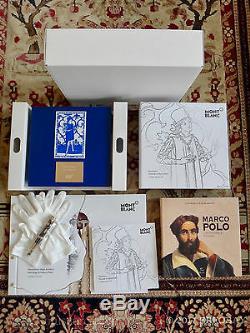 MONTBLANC High Artistry (Artisan) Edition Homage to Marco Polo The Silk Road Limited Edition 69. I did not write half of what I saw, for I knew I would not be belived Marco Polo. Ident: 115423 Launch: Oct 2016 (Montblanc Gala event in Tokyo) Material: Au 750 Champagne gold, Damask steel, wood, lapislazuli (central stone 6.62 Ct) With the 2016 High Artristry Homage to Marco Polo LE 69 Montblanc hit the target with a spectacular model that combines many suggestions from the recent Aritisan production (the long/extended cap we already saw in the Picasso 91 and Picasso 39, the wind rose we find on the inner packaging of Gustave Eiffel 91) and an equal amount of very innovative solutions (first of all the Damask steel cap and secondly the use of wood for the barrel).

This very appealing edition falls between the Cristobal Colon 92 and the Skeleton Genghis Khan 88 as logical development of the travel theme. Design Features: · Au 750 solid champagne gold nib with special design · Au 750 solid champagne gold fittings · Cap set with Mother-of-Pearl Montblanc emblem · Cap made in damask steel · Barrel made of wood, which is inspired by the traditional rose furniture from China · Lapis bowl 6.62 Ct · Gold weight of barrel and cap together: 49,6 grams _______________________ Marco Polo, world explorer The greatest explorer of the Orient during the Middle Ages, Marco Polo (1254 1324) travelled for 24 Years, many of them spent along the Silk Road experiencing cultures unknown to most Europeans at the time. Born into a Venetian merchant family in 1254, he joined his father and uncle at the age of 17 on a journey that would take him eastward to Beijing and beyond, seat of the powerful Chinese emperor, Kublai Khan (1215 1294). To get there, they traversed Persia, then a thriving trade centre for costly blades made of Indian Damascus steel, continuing through Afghanistan to the Mongol Empire, with its snow covered heights and vast reaches.

Thanks to his book describing his travels, Europeans were able to envision distant places such as Japan for the first time. In honour of the famous explorer who opened the secrets of Asia to the western world, Montblanc has created the Homage to Marco Polo Limited Edition 69 - as rich in its design and craftmanship as Marco Polos epic journey. _______________________ Serving the Khan The grandson of Genghis Khan, fifth Great Khan of the Mongol Empire and founder of the Chinese Yuan dynasty, Kublai Kahn was ruling in Dadu (now Beijing), when Marco Polo arrived.

Enjoying the Khans favour at court, Marco Polo was sent as his personal emissary throughout China and India. This enabled him to write, later, about experiences in remote places like Burma and the bamboo forests of Tibet. Had his travels not been recorded in Italy around 1298, an enormous wealth of information would have been lost.

As it was, his book Il Milione (The travels of Marco Polo) remains a milestone of world litterature. The cap of the Homage to Marco Polo LE 69 is made of bright Damascusa steel a legendary metal famous in Marco Polos time for its extraordinary quality. The Damask steel is produced with the knowledge of the ancient tradition of pattern welding combined with the best steel properties of today. It is one of the best performing stainless Damascus steel in the world. Different from other company processing damask steel with Torsion (torsion damask cut), Montblanc Artisan creates another unique process (transversal cut) to bend the whole Damask steel plate and push it onto a stainless steeel wall with 0.5mm.

Then the steel plate is cut with the metal wall together. The advantage of the MB process is able to maintain beautiful pattern of the transversal surface. Finally, the shape of the cap refers to a specific detail of his travels described in his book: the bamboo forests of Tibet. _______________________ Il Milione More than a simple travelogue, the book that captures Marco Polos incredible journey carries great geographical and historical significance.

Accounts of foreign treasures such as precious silks, spices and gemstones, including rubies and lapis lazuli, fill its pages, and foreign rulers and their magnificent courts are depicted with equal fascination. Also known as The book of Wonders, this work had a greater impact on future generations of explorers than any other of its kind. Christopher Columbus even carried a copy with him on his journeys. In reference to the city where his journey began and ended, this limited edition pen recalls Venices magnificent palaces in filigree Au 750 champagne gold fittings: the design of the cone, in particular, features the delicate pointed arches characteristic of the Venetian architectural style.

Because Marco Polos travels took him literally halfway around the globe, the cone is set with a symbolic globe made of lapis lazuli (Ball cut, 6,62Ct) a precious stone brought to Europe from the Mongol Empire via the Silk Road. _______________________ The Silk Road The most famous caravan trail of the Middle Ages, trodden by long rows of heavily laden camels, the Silk Road was a vital trade route connecting East and West in a bustling echange of goods, art and culture. A myriad of precious goods were traded along the transcontinental network, including musk, spices and glass, as well as the secrets of silk production and the cultivation of mulberry trees, whose leaves provided silkworms with their sole source of nourishment. As a token of the importance of the Silk Road in carrying knowledge of this special wood to Europe, the barrel of the Homage to Marco Polo LE 69 is made of precious wood.

This kind of wood has garnered a reputation around the globe as one of the highest quality woods of the Dalbergia genus. Some of the Coco bolo is dense and will sink in water. To support the wood, MB Artisan created a unique mechanical gasket (a special O-ring) which create a air space between the metal wall below the wood barrel surface. This gasket allows the wooden barrel to hold its position and become very resistant. The fine Au 750 champagne gold inlays in the Damascus steel of the cap symbolise the stages of Marco Polos journey along the Silk Road, while an image of Marco Polo on horseback in the style of the handcrafted Au 750 champagne gold nib.

_______________________ The Catalan Atlas The Catalan Atlas of 1375, the most important world map of the medieval period, is not only a visual treasure trove of rich illustrations, but also astonishingly precise, considering that the Asian portion is based almost exclusively on Marco Polos written travel accounts. Appearing on the third of the six tablets that make up this mapi s a compass rose showing eight directions but placing particular emphasis on the arrow pointing north, as the North Star provided the main bearing for all seafarers and travellers. In the reference to the historic Atlas, a compass rose is finely engraved under the cap top of this fountain pen. It is revealed by unscrewing the cap top bearing the MB emblem in mother-of-pearl.

On the underside of the MB emblem a further engraving is revealed, commemorating this family of great adventurers with the Polo coat of arms. _______________________ The paiza A long metal tablet made of gold, silver or bronze, carried by officials and envoys of the Mongol Empire, a paiza was a sign of privilege and authority bestowed directly by the Khan. It allowed passage accross borders and showed the bearer to be under the Khans protection.

It also enabled Mongol noblemen to demand goods and services from civilian populations. The paiza and its many variants, reflecting the rank of the bearer and the extent of their privileges, were well described by Marco Polo, who, along with his father and uncle, possessed one of his own tangible proof that he really did travel to China, was received at the court ans was highly valued by the Khan. For this reason, the clip of the Homage to Marco Polo LE 69 bears a replica of a paiza.

The pattern engraved on the cap ring recalls the fanciful creatures decorating the hand-illustrated book Il Milione the book that made Marco Polos name immportal. The Montblanc Homage to Marco Polo LE 69, created in 2016, is limited to only 69 pieces worldwide.

As a sign of its uniqueness, each writing instrument in this higly exclusive edition bears an engraved limitation number. It was made by a master craftsman using the finest materials and applying the utmost precision. Very few produced (just 69 worldwide). The fountain pen comes in Still sealed condition.

All original boxes and papers. VIP Montblanc Marco Polo coffe-table book is included. The item "MONTBLANC ARTISAN EDITION HOMAGE TO MARCO POLO LE 69 THE SILK ROAD M SEALED 2016" is in sale since Friday, March 10, 2017. This item is in the category "Collectibles\Pens & Writing Instruments\Pens\Fountain Pens\Montblanc". The seller is "erfobay" and is located in Paris. This item can be shipped worldwide.