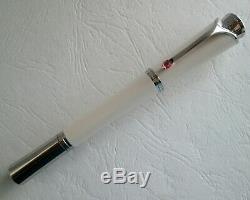 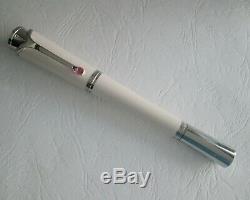 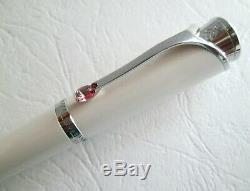 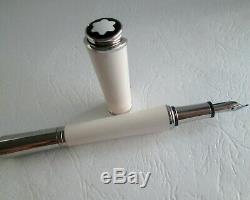 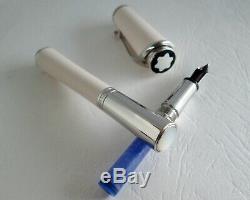 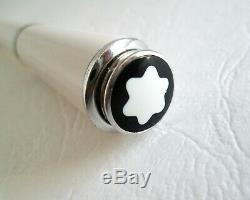 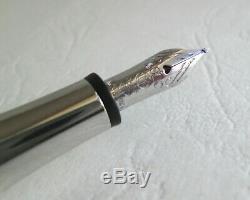 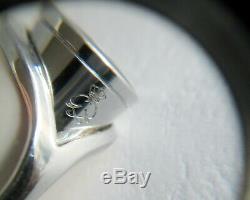 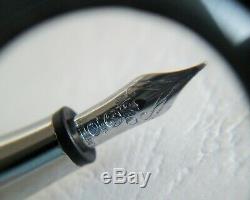 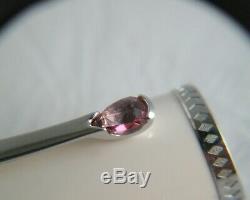 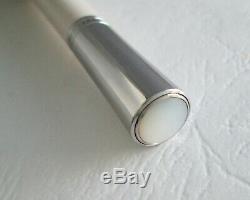 Original Montblanc "Princesse Grace De Monaco" fountain pen in Great condition and functionality. A beautiful state-of-art pen for the friends of Montblanc and mostly for those who want to offer to their beloved a special gift. A Hamburg banker, Alfred Nehemias, and a Berlin engineer, August Eberstein, produced simple pens in 1906.

After a short period of time Wilhelm Dziambor, Christian Lausen and later Claus Johannes Voss took over the business. Their first model was the Rouge et Noir in 1909 followed in 1910 by the pen that was later to give the company its new name, Montblanc. The Meisterstück name (English: "Masterpiece", the name used for export) was used for the first time in 1924. Today, the Montblanc brand is on other goods besides pens, including watches, jewellery, fragrances, leather goods and eyewear.

The company was acquired by Dunhill in 1977, following which lower price pens were dropped and the brand was used on a wide range of luxury goods other than pens. Today, Montblanc forms part of the Richemont group.

The number "4810, " the mountain's height in meters, is also a commonly recurring theme. In January 2014, Hugh Jackman was announced as Montblanc's Global Brand Ambassador, outside of US. Montblanc makes several models of pens, with the Meisterstück (fountain pen) representing the cornerstone model. Each model is slightly different, however models created after 1990 have a serial number located on the ring at the top of the clip. Under the clip is usually the words "Made in Germany" and often "Pix".

Moreover, the barrel of the pen will reveal a reddish hue under strong lighting. If the pen in question does not have these attributes then it is possibly a fake. ABOUT THIS MONTBLANC FOR SALE.

Very luxurious and stylish with mother of pearl edge and a semiprecious stone on the holder. 135mm length and 17mm its bigger diameter and 37gr weight with empty ink container. Offered without ink because it is not allowed in flights to carry objects with ink containers.

No box or papers, it is offered as showed at the supersized pictures. Some secrets you must know about Montblanc. 4810 is the height of the actual Mont Blanc mountain (4,810 metres from sea level). M in the six-pointed star circle is the Montblanc logotype. 750 or 585 (sometimes Au 750 or Au 585) is the actual gold content of the nib and articulates with 18K or 14K.

NO EXTRA CHARGES FOR BUYERS OUTSIDE EUROPEAN UNION. CHECK MY FEEDBACK TO SEE THE COMMENTS OF MY CUSTOMERS! ALL ITEMS DEPART FROM GREECE.

The item "Montblanc Princesse Grace De Monaco 4810 Medium Fountain Pen Silver 585 +Stone" is in sale since Monday, April 15, 2019. This item is in the category "Collectibles\Pens & Writing Instruments\Pens\Fountain Pens\Montblanc". The seller is "apostolos72" and is located in Melissia, Attiki. This item can be shipped worldwide.